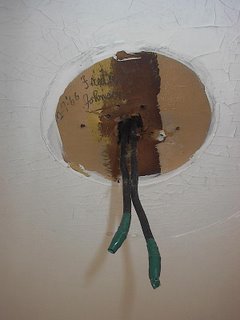 While working on what has turned into more than a year long kitchen project, we decided to replace the ceiling lights with an eight foot flourescent lamp fixture. Underneath one of the old fixtures I found some handwriting. Apparently, a man by the name of Frederick Johnson installed it February 7, 1966—almost forty years ago.

After seeing his handwriting, I felt like I had found a mysterious artifact! You must realize that the house we own was built in 1830 and has been added onto several times. (We still have pieces of coal in the coal shute.) So, who was this man? Was he a previous owner? Was he just a friend helping with the work? Or was he an electrician making a note for himself? How could I figure out this mystery?

The previous owner left a compilation of records dating back to 1841, so I began doing some research. The nearest record to 1966 was a Certificate of Appointment of Fiduciary which appointed Julia J. Crump “as executrix of the estate of Jeannette Spaulding, deceased” on August 20, 1973. Another record revealed that Leslie J. Spaulding and Jeanette Spaulding took out a $1,678.31 loan to purchase the house on April 10, 1922. (Their monthly payments were a whopping $16 per month!)

If the Spauldings owned the house from 1922-1973, who was this Frederick Johnson? Perhaps we will never know. But just in case someone remodels the kitchen forty years from now, I wrote our names on the back of the light fixture. If anyone asks, be sure to let them know who Andy Rupert and Mike Haselow are, okay?