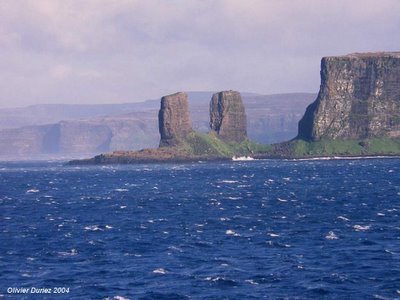 After Captain Yves de Kerguelen de Tremerac discovered Isle de Kerguelen in 1772, Captain James Cook visited the island on Christmas day 1776 (more info). At the time there was a 300 foot arch of stone which caught the crew’s attention. Jean-Paul Kauffmann writes of his fascination with this arch and his great disappointment when, after finally getting the chance to visit the island, he found that the arch had fallen years earlier. (I must admit that I was disappointed to learn that as well.) But even though the arch has fallen, the harbor is still quite beautiful as you can see in this photograph taken by Olivier Duriez during his recent trip. This is one of many interesting pictures of the island which are available at this web site.