According to one website, touché may be defined as: 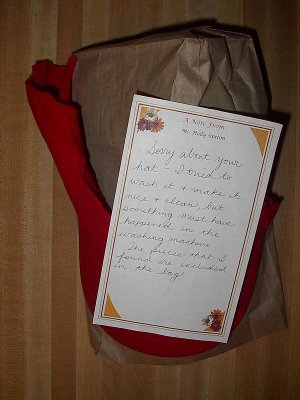 touched [French] In fencing, a touch of a sword on the opponent’s body is worth a point. Thus, touché has come to mean a score or a point, often used figuratively in verbal fencing and spoken by the person against whom the point was scored.

After verbally sparring with our fourth grade teacher (who happens to be from Michigan), after sending her a Christmas card with a picture of Lloyd Carr wearing a “will coach for food” sign, and after placing a Buckeyes ball cap in her class room, finally, she has had the last laugh.

I walked into my office Monday morning to find a paper lunch sack, a mangled red ball cap, and a hand written note on my desk. The note was nicely written on Miss Saxton’s personal stationary.

Sorry about your hat — I tried to wash it and make it nice and clean, but something must have happened in the washing machine. The pieces that I found are included in the bag.

Upon opening the bag, I found the complete Buckeyes hat inside. Apparently, she had cut up another red hat just for the occasion. So you see that I have now lost. Miss Saxton, you win. Touché!