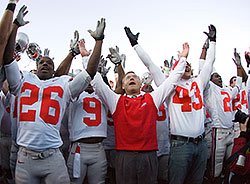 Today was my day off. Besides taking a two hour nap this afternoon, I enjoyed watching several short videos about the Ohio State Buckeye’s football team.

Holy Buckeye (:30) is the play that I missed one Saturday while preparing my message in the computer room. I remember hearing Sharon yelling from the living room. “I can’t believe it! You have to see this!” It was 4th and 1 at Purdue when Craig Krenzel threw an incredible pass that won the game. Brent Musburger was right when he coined the phrase.

Archie’s Army (2:01) is a short documentary of the accomplishments of Ohio State’s standout running back Archie Griffen. The end of the movie is a bit hokie, but you have to admit that his accomplishments were spectacular. As far as I know, he is still the only player who has earned the Heisman Trophy twice.

Trip to the White House (9:48) is a home video of the 2002 Ohio State University football team at the White House following their national championship. I especially liked the speech President Bush gave about being an example off the field. Note what Kirk Herbstreit (former OSU quarterback) said after the speech.

Carmen Ohio is the alma mater of the Ohio State University. WOSU television used to close out its broadcast at midnight every evening with this beautiful song. Stand to your feet and place your hand over your heart as you listen to the marching band play this inspiring song.