During the past few College and Career Retreats at Peniel Bible Camp, I have invited speakers whom I met while in college. One year I invited the man under whom I worked in the extension office at Northland. Next, I invited an evangelist whose life I had seen change over the years. He used to be an angry speaker but then the Lord convicted him of this and caused him to become a more of a patient man. This last year, I invited one of my undergrad professors. I didn’t get to know him very well until we were both serving together as deacons at a small church in Northern Michigan. It was then that I recognized the wisdom and patience he had.

All of these men made an impression on my life while I was completing my Masters. But when it came to introducing each of them as the speaker of the retreat, I was never sure what to say. I could think of experiences that he and I would laugh about. But what could I say to encourage the audience to listen to the speaker as one sent by God? I honestly don’t remember what I said about each. But I was aware that my introduction was supposed to prepare the people for the personality they were about to meet.

The same can be said for an introduction to a book in the Bible. A good introduction prepares the reader for what the book is going to say. Depending on the author, an introduction can either help or hinder. Some find that short comments are the most helpful. The Ryrie Study Bible is a good example of this as it usually gives only a paragraph or two about each book. Commentaries provide a more in-depth introduction. Some authors take more than forty pages to accomplish the task. That’s a bit more than most people can handle.

In this article, I will attempt a brief introduction Peter’s second epistle. To do this, I will be dividing it into five sections: (1) the author and recipients, (2) date and location, (3) occasion and purpose, (4) the main idea, and (5) a practical outline of the epistle. I hope that my efforts will encourage you to study the epistle in greater detail.

The author and recipients

Author — The epistle begins with a greeting from the author, Simon Peter. As you well know, he was one of the twelve apostles. He was also one of the three disciples selected by Jesus to be closest to him. Peter was always the first to act and the last to think. Remember his walking on the water to Jesus (Matt. 14:28-31). No other disciples was willing to do that except Peter. Peter also voiced his recognition that Jesus was the Christ (Matt. 16:13-20). But he was also the one who later denied even knowing the Lord during his trial (John 18:17, 25-27). But after the resurrection, Jesus restored Peter and gave him a commission to feed his sheep (John 21:15-17).

After the Ascension, it was Peter’s message that God used to open the eyes of about three thousand people (Acts 2:14-41). You can follow the ministry of Peter through the first twelve chapters of the book of Acts. He was a man greatly used by God for the salvation of Jewish people and later of Gentile people. It is no surprise that God would inspire such a man to write such a letter to a group of early believers.

Recipients — This epistle begins with a generic greeting (1:1). It could have been addressed to any number of believers living at that time in history. However, toward the end of the book (3:1), Peter declares that this is the second epistle written to this group. As there are only two canonical epistles attributed to Peter, it is most probable that this was a follow up letter to the same people addressed in the first epistle. They were believers who had been spread throughout the regions of Pontus, Galatia, Cappadocia, Asia, and Bithynia (1 Peter 1:1-2). These people lived in modern day Turkey. 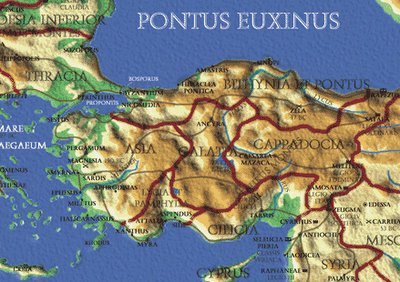 What was happening at this time in history? According to one historian, the emperor Nero ruled during this time (AD 54-68). He was a decent ruler for a while but slowly became more and more perverse. In AD 62, Nero divorced his wife and had her executed so that he could marry another man’s wife. During that year, one of the men who had restrained his excesses died. He was replaced by a wicked man who encouraged more excess. Then in AD 64, Nero watched as most of the city of Rome burned to the ground.

“Nero, always a man desperate to be popular, therefore looked for scapegoats on whom the fire could be blamed. He found it in an obscure new religious sect, the Christians. And so many Christians were arrested and thrown to the wild beasts in the circus, or they were crucified. Many of them were also burned to death at night, serving as ‘lighting’ in Nero’s gardens, while Nero mingled among the watching crowds” (Roman Empire).

Peter’s first epistle took place during these trying times. This second letter was written some time afterward. But how can we find out when exactly it was written? To do this, we must rely on the historical work of others and the evidence in the letter itself. “The traditional date for Peter’s death is late A.D. 67 or early A.D. 68” (Gangel, Kenneth O., “2 Peter” in Bible Knowledge Commentary New Testament, (USA: SP Publications, 1983), 862). The epistle was probably written a short time before this date because Peter states that he is shortly to die (1:14). So, it would be safe to assume that this letter was written during the year AD 67.

Occasion — When a man grows older, he begins to think more about the future. He thinks about writing our his will. He wonders how the family will be taken care of when he is gone. And he becomes more concerned with spiritual things.

Peter was not just an elderly man. He was an elderly apostle. He had traveled quite a bit and had spoken for Christ in many cities. Just look at the book of Acts for an example of his early itinerary. Now years later Peter is an old man who has been imprisoned for his faith. He realizes that the torch must be passed along to the next generation, but he is concerned about their future.

Another thing that bothered Peter was the presence of false teachers and the influence they would have on these dear believers (2:1-3). The Church had already fought against legalism. Peter was sure that they would face more heresy after his death. So, these things weighed heavily on his mind.

Purpose — With these problems on his mind, Peter was motivated to write this letter for two specific purposes. (1) He wanted to warn them of the danger. As you read through the book, you can see how careful Peter was to point out the foolishness (2:22) and the end result of these false teachers (2:17). But he also shows them how easily they could be influenced (2:18). (2) He wanted them to progress spiritually. Several times in the letter, Peter shows ways that the believers could become better Christians (1:5-11; 3:18).

The main idea of a biblical book should be summed up in one concise sentence. While it cannot contain every thought that is covered in the book, it should convey the main thought that the Lord inspired the writer to put down on paper. After reading through the book several times, I have come away with the following statement:

Spiritual believers will be ready for the dangers ahead.
This idea is drawn from Peters’ concern for the spiritual well-being of these believers. He is doing everything he can to prepare them for the danger that lies ahead. But he knows that some of them will still fall to the deceitful teaching the false prophets. But he is confident that a spiritually minded believer will be ready. He can be ready by adding spiritual characteristics to his life and by trusting the Scriptures. No matter how great the test, spiritual believers will be ready to face it.
Practical Outline

I believe that this letter is a good one for believers to study today. It is applicable because of the prevalence of false doctrine and weak believers. Christians are falling to every whim of doctrine because they have such little knowledge of the Scriptures. The answer for this is adding knowledge to their lives (1:5) and to grow in their knowledge of Christ (3:18). Another problem today is weak Christians. Believers do not know how to live the Christian life and often flounder after being born again. What can be done? Peter describes what should be added to a new believer’s faith (1:5-11). If these characteristics are added to our faith, we will become people whom God will honor.

Spiritual believers will be ready for the dangers ahead.
A study of 1 Peter teaches that persecution will come to godly believers. Paul said as much in 2 Timothy 3:12. “Yes, and all who desire to live godly in Christ Jesus will suffer persecution.” We must prepare ourselves to face that. But there is another danger that we face today: false teachers. Are we ready to face it and to battle against it. False teaching comes in several varieties. It is easy to point out and avoid the blatant heresies, but what about those which are close to us? (2 Pet. 2:1) Are we ready for them? With God’s help we can be. This idea comes from Peters’ concern for the spiritual well-being of these believers. He is doing everything he can to prepare them for the danger that lies ahead. But he knows that some of them will still fall to deceitful teaching the false prophets. But he is confident that a spiritually minded believer will be ready. He is ready by adding spiritual characteristics to his life and by studying and trusting the Scriptures. No matter how great the test, spiritual believers will be ready to face it.