What’s wrong with Christian rock? As a teen, I found the music and lyrics of Petra and Stryper to be quite motivating. The music was an outlet for my emotions and caused me to think about spiritual themes at the same time. In fact, I dedicated my life to Christ after listening to a Christian rock album. So what’s the big deal? Why do some people make such a big stink about this genre? 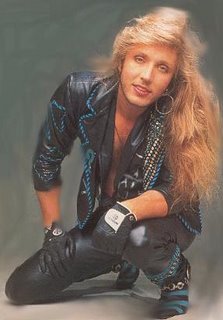 After the Lord gained control of my life during the Fall of 1989, I began to rethink some of the arguments I had used in support of CCM. I remember watching an interview of Stryper’s drummer, Robert Sweet. When asked about his tight clothes and heavy metal music, he had an immediate response. The band’s reason for dressing and playing as they did was for the purpose of reaching that niche group. If they could look and perform like their secular counterparts, they would have a better chance of reaching the lost. If Hudson Taylor shaved his head and wore a pony tail to reach the Chinese, why shouldn’t that same principle apply to reaching head bangers?

During my teen years, that logic sounded pretty good: to win the lost, just look and act like the lost. The less they have to overcome, the easier it will be to win them to Christ. As time went on, my thinking changed quite a bit. I began to see that this type of logic did not address all of the issues. How far should I take that? Are tight leather outfits appropriate if you are trying to reach a niche group? When a secular group had three normal members and an effeminate one, Stryper marketed their album that way. Robert Sweet posed in lipstick, etc. That didn’t seem right but I liked the music too much to give it up at the time.

As I began my studies for the ministry, I began to take a closer look at the music to which I was listening. Was Stryper the only band propogating this philosophy? While all CCM bands do not go to the extreme that they did, this same philosophy seems to be the guiding principle for many. If we can look and sound like secular entertainers, people will listen to us, giving us an opportunity to speak about Christ. I remember visiting a Christian book store in Columbus which had a chart to help you find the right sound. If you like this secular band, you will like this Christian band. Is this the philosophy that should guide our lives?

My conclusion is that this way of thinking is very dangerous. It promotes a message lacking repentance. In effect, their unspoken message was, “Don’t change—Jesus accepts you just as you are.” But is this true? Does God accept sinners just as they are? This question must be answered carefully. The Bible is clear that all men are sinners who do not seek God (Rom. 3:10-18). We do not have the ability to remove our own sinfulness. So, in a sense, we must come as we are. But what about repentance? When God draws a man to himself, he demands repentance from that sin (Luke 13:1-5; Acts 2:38) as well as faith in Christ (see Acts 20:21). To proclaim pardon through Christ without addressing sin and repentance is deceitful. God does not promise salvation to an unrepentant sinner. I conclude that attempting to reach the lost by joining in their lifestyle is both foolish and deceitful. It is foolish to think that worldliness will win unbelievers away from their lifestyle. It is also deceitful to preach a gospel devoid of repentance. That philosophy in itself ought to be enough of a warning against those who use it.