My dad has a workshop full of every tool imaginable. When I need a tool I know that he already has it. But as he lives several hours away, I am unable to take advantage of them. My grandpa Rupert (who died when I was only five) had a nice workshop as well. His specialty was electrical gadgets. He had lots of drawers full of radio tubes. Grandpa Grimes (my mom’s dad) was a repairman for the Erie Lackawana railroad station in Meadville, Pennsylvania. His workshop ceiling was filled with mason jars whose lids were screwed to the ceiling. He has also been involved with ham radios for a long time. Sharon’s dad is a tool and die maker and enjoys working with his hands. 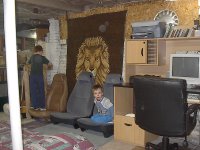 All of that explains why Jefferson wanted to help me with some projects in the basement this afternoon. The first project involved removing the adjustable slides on the bottom of the Saab seats. (You never know when you might need a good Saab seat.) Four bolts held the slides to the bottom of each seat. I loosened them and he completed the job. He removed the two on one side, but got mixed up and began tightening the other side. “Lefty Loosey, Righty Tighty.” He eventually got it and enjoyed the project. 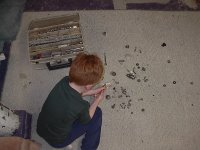 As I had brought in my tool box from the car, our next project turned out to be cleaning out all the extra bolts I had in the top compartment. Whenever I removed a Saab bolt, screw, clip, or fuse, it ended up in the top compartment. After five years owning Saabs, the collection has grown considerably as has the weight of the tool box. Jefferson did a good job sorting things out. He even placed them in their own drawers on top of the work bench. His only problem with this project was when Katie tried to help him. All in all, he did a good job with both projects.