After working as a computer programmer for many years, dad finally retired this Friday. I happened to be in town for a school bus mechanic’s workshop. So, I stayed an extra morning for the retirement party put on by his co-workers. It was a low key celebration but special to dad I’m sure. Among the old timers were Steve Bender, Dan Corey, and R. K. The former two had worked with dad at Columbus Auto Parts years ago. 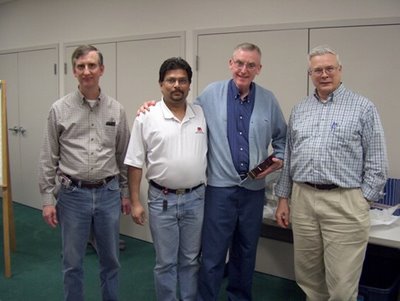 Dad began as a factory worker at Columbus Auto Parts. The legend has it that they offered him an office job due to his neat hand writing. As computers became more popular, they trained him to become a computer programmer. Those were the days of punch cards, reel to reel tape, and green bar paper. As kids, we would often visit his office to play Mille Bornes or Mystery Mansion on the terminal in his office.

Since Columbus Auto Parts, dad has worked at several other companies: COPCO Paper Company, Metal Forge, as a private consultant, and most recently at Unisource. At each of those companies, there has been someone from the original crew at Columbus Auto Parts. I still remember Joe Munson, John Bracey, Tim Lance, Dick Gray, and a few others. Over the years, dad took the opportunity to speak to various co-workers about his faith in Christ. I’m hoping they will contemplate those conversations as he begins his retirement.