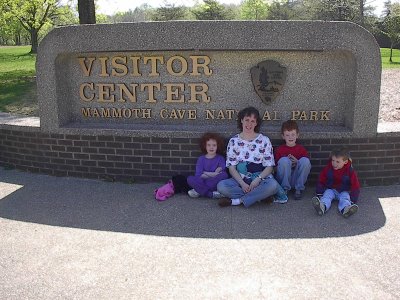 We got up fairly early Tuesday morning, but weren’t early enough to beat the crowds. While we were standing in line, monitors indicated that the 1 hour tour was booked until 4:30 pm. So, we decided to take the two hour tour at 2:30 pm. That was a risk with three children, but we thought it might be more worth the money. 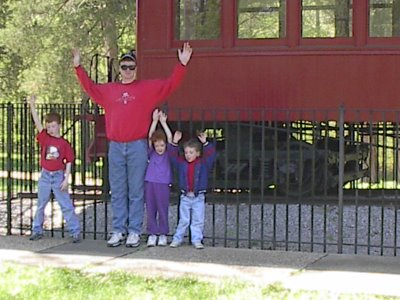 We decided to travel back to the motel for lunch and a nap. But on the way, we stopped at a couple of sites for pictures. Just as you leave the welcome area, there is a fenced in display of one of the original Mammoth Cave Railroad engines and a passenger/supplies car. 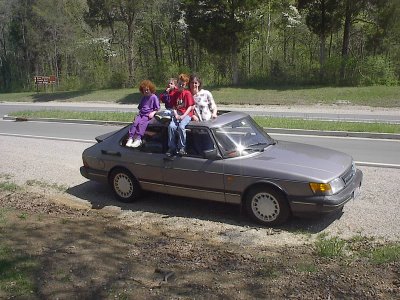 What would our vacation be without a family picture with our chariot? We made 29.57 mpg driving 65 mpg from Columbus to Cave City, Kentucky. You have to admit that’s not too bad for an 18 year old car. 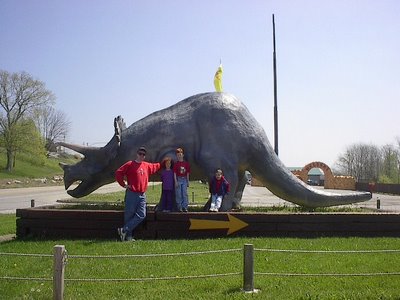 Right at exit 53, there’s a place called Dinosaur Land. They have an orange Tyranosaurus Rex in plain view of the exit. So, the kids were quite interested to visit the place. But, if we had purchased tickets, it would have cost us about $50 for the family. So, we decided to take pictures outside instead. 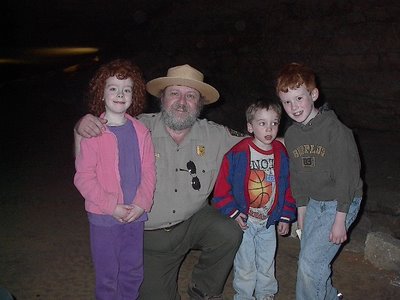 After lunch and a short nap, we began the Frozen Niagara tour. In all honesty, I was more impressed with the iron mine in Vulcan, Michigan than what we saw of Mammoth Cave. But we had a nice time together as a family. Our guide, George, answered a lot of questions and agreed to pose with the kids. And amazingly, even though we had prepared the kids against an evolutionary talk, he never said anything about it.

Would we drive eight hours away from home to do it again? Well, I’m not quite sure. It was a nice getaway. But there may be other opportunities that would prove to be just as enjoyable.