The Bible contains the record of several men who were involved in a form of street preaching. Jeremiah was commanded by the Lord on several occasions to do this. John the Baptist and the Lord himself ministered to large crowds. The prophet Jonah preached with a bad attitude and the ungodly nation of Nineveh repented. Is this something Christians should be doing today? Notice the perspective of one man about street preaching. 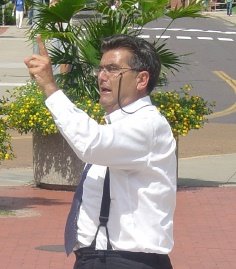 I’m not too sure why people try and reason or correct these born again folks. Although this woman had more Bible knowledge then most, Shadrak, Meshak, Abendigo, whatever his name is quickly pulled out a bunch of chapters and verses sending this poor woman to the fiery underworld. It is of my opinion this whole born again thing has nothing to do with God or Jesus and everything to do with “I’m right and you’re wrong”. I also believe them to be highly delusional in their belief of superiority. There were times I thought they may be the genuine article and actually believe all the stuff they were preaching, but after watching them on multiple occasions I have come to the conclusion they really just want you to be wrong and them to be right. There is no soul saving going on here.

I think we should be careful not to base our decisions on the response of the lost. The fellow quoted above might not be persuaded by a kinder, gentler preacher either. But it does make you wonder whether more harm is being done than good by some of these street preachers.

My experience is limited to a Methodist street preacher named Brother Jed who attracted derisive comments at the Ohio State University during the late 80’s and early 90’s. I admire his courage and dedication, but have also wondered about his demeanor. He seems to think he is doing right. But could he have accomplished more with a kinder attitude? To be honest, the preaching I have heard from ministries like this seem to favor preaching damnation more than salvation from it through Christ.