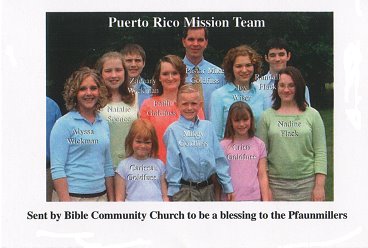 Bible Community Church sent out a teen mission team to Puerto Rico early this morning. The team is led by the Mike Goldfuss family, veteran missionaries to Mexico City. The team will be assisting the Bill & Theresa Pfaunmiller family with evangelism, special music, and youth programs. Future updates will be available at their blog, Big Mexico City.

“These poor families have been victimized on 6 June at 3:00 am, which is the time for making preparations to say prayers. They were attacked brutally in Commando style. The attackers did not spare anybody and showed no respect to women at all be they young, old or pregnant women.”

Prominent black leaders said they will work to combat Christian conservatives they say have used gay marriage and abortion to distract from larger moral issues such as the war, voting rights, affirmative action and poverty.

Popular radio speaker, Kay Arthur says, “I think we’re feasting on books and television and worship and music and I think there’s longer periods of worship in music than there is in the Word. And so I don’t think we really know God.”

NASA Has Plan to Land Space Shuttle with no Crew
Reuters

The destruction of the U.S. space shuttle Columbia in 2003 not only spurred NASA to figure out a way to save a stranded space shuttle crew, but also how to get their damaged ship back home. Among the two tons of cargo the shuttle will be toting to the International Space Station is a set of cables that could be used to hot-wire a shuttle so it can be remotely controlled to leave orbit and land without a crew aboard.

“Sony’s Blu-ray technology can fit 25 gigabytes of data on a disc, more than five times a normal DVD’s 4.6 gigabytes. This, combined with a data transfer speed three times faster than today’s DVDs mean it can store high-definition content made for the increasingly common large-screen plasma and LCD television sets.”