One of the group’s facilitators wrote: “Since God did not see fit to preserve the original manuscripts, as an all-powerful God presumably can do, that is a pretty good sign that the Bible is not inerrant, much less a foolproof guide to the questions of the present age, such as abortion, women’s rights, gay rights, religious supremacy, Western-style democracy, etc. We can’t set up the Bible as a false idol.”

What do pickles and Presbyterians have in common? Chris Anderson wonders the same thing in this humorous book review. “I know this much: I’ll never eat a pickle the same way again.”

The rocket hit the empty courtyard of a high school and caused no injuries, but the attack – the deepest into Israel thus far – meant a realization of long-standing Israeli fears. The attack is also bad news for Olmert, because it strengthens his hawkish critics who argue that his plan for a partial withdrawal from the West Bank would put also towns and cities in central Israel at risk. 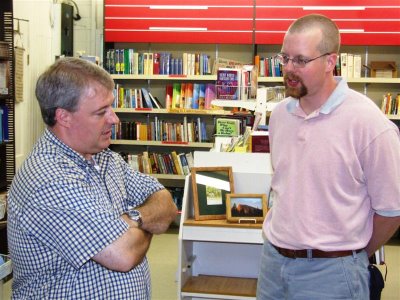 I ate 26 White Castle hamburgers for a 9th grade fund raiser. (If I remember right, Julie ate 20!) But there’s no way I could eat the number of hotdogs this man ate. Yikes!