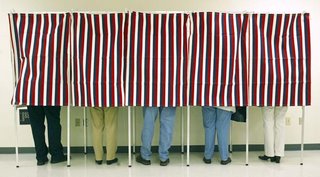 Despite the Kansas City Star article which reported otherwise, I had no problem voting in Ohio. Three volunteers checked my Driver’s license and signature against their records at lunch time. Then one of them led me to the electronic voting machine and explained how it worked. When he was finished, he asked if I had any questions. I had no problems. Amazing, eh?

Not as bad as they say …

“A government leader in Iraq’s Kurdistan region has told Gold Star Families visiting U.S. troops in the Mideast that the news media’s coverage of the situation in Iraq is terribly biased. ‘CNN International and Al Jazeera are equally bad in their coverage of the situation in Iraq,’ said Nerchivan Barzani, the prime minister of Iraqi Kurdistan. ‘When I was in the United States recently and read the negative news in the Washington Post, New York Times and in the network TV broadcasts, I even wondered if things had gotten so bad since I had left that I shouldn’t return,’ he said.”

“The citizens of South Carolina will vote this Tuesday on a monumental constitutional amendment. The proposed amendment states: ‘A marriage between one man and one woman is the only lawful domestic union that shall be valid or recognized.’ If this amendment is passed, South Carolina will join 19 other states with constitutional amendments recognizing marriage as only between a man and a woman. Currently, Massachusetts is the only state that allows same-sex marriage.”

Do you understand the difference?

In the above linked article, Lauren Dunn of Tufts University, attempted to show the difference between fundamentalism and evangelicalism. However, she got things a bit mixed up. At one point she said, “Fundamentalist Christians are sometimes referred to as ‘neo-evangelicals’ …’ I wrote a comment at the end of her article attempting to correct her assertions. But the other comments indicated that others didn’t know any better.