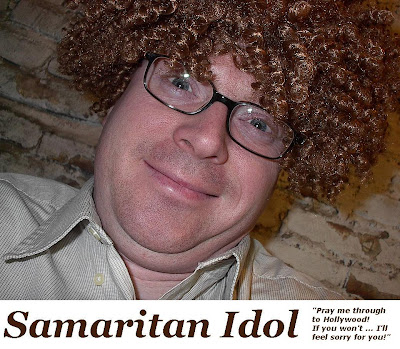 The picture above is a spoof. But isn’t it interesting how quickly Christians jump on the bandwagon to support anyone famous who calls himself a Christian? When Christian athletes speak about “the Lord” we are moved to tears despite the fact that their industry keeps thousands of people from attending services at their local church.

The latest “opportunity” has been reserved for Chris Sligh of American Idol fame. He is a 28 year old “rock star” who attended both Pensacola Christian College and Bob Jones University. His latest acheivement has led Joe Blair at Sharper Iron to ask us to pray for this man’s opportunity.

I would ask that we all pray for Chris Sligh as he continues on his American Idol journey! I’m thankful for a brother who can be a witness in this arena!! It’s not everyday that a Christian has the opportunity to reach so many in this way. Rather than judge let’s ask the Lord to use this time to reach many with the Gospel!
Thanks!1

Before beginning to pray for Chris Sligh’s golden opportunity, perhaps we should ask ourselves a few questions:

Is it appropriate for a Christian to be involved with a program such as American Idol?

I don’t know much about the program, but the few clips I’ve seen do not make me think of becoming more like my Lord Jesus Christ. Most of it is the usual immodest, sensual sounds of worldly entertainment. In other words, why would you want to be involved with a program that promotes the flesh?

Is he able to use this “opportunity to reach so many in this way?”

I don’t know if he has used this “opportunity” as I’ve only seen clips of his interviews on the internet. But I would doubt that the program allows him to say much about the Lord Jesus Christ on their time. Usually “Christians” who make it in the entertainment industry are severely limited in what they can say. I sincerely doubt that this has given him much of a platform from which to minister.

Is he promoting repentance from sin and faith in our Lord Jesus Christ?

I found it odd that he listed Freddy Mercury as one of his favorite male vocalists. Mercury, while “widely considered one of the greatest vocalists in popular music history”2, was the extremely vile lead singer of the homosexual rock group Queen. Isn’t that a strange connection for a Christian who is attempting to be a light in this dark world? This lack of separation from worldliness sends a confusing message. Can you have Christ and worldliness at the same time?

Too many famous “Christians” are blurring the line between Christ and the world by getting involved in worldliness in the supposed attempt to reach the world. That seems to be the case here. Because of that, I’m not convinced that this is a great opportunity for Christ to be glorified. Instead, it seems to be a great opportunity for Satan to confuse the world through Sligh’s mixed message. If we are going to pray for him (and I think we should), let’s ask the Lord to open his eyes to his error. Only then will he be able to repair the damage that has already been done and be a positive testimony for Christ.