The Ohio State Buckeyes beat the Wisconsin Badgers (66-49) for the second time this season in the championship game of the Big Ten tournament. As a team they are becoming one of the better teams in the nation, but I still think they will have their hands full with the likes of Florida in the NCAA tournament. Then again, maybe they really are the #1 team in the nation. Maybe? 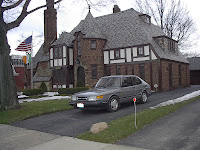 The Columbus Dispatch recently published an article about Fitzgerald’s Bed & Breakfast. Sharon and I stayed there a few years back and really enjoyed it (even though it’s within walking distance of our home). The interior is as beautiful as the exterior with wooden floors and an exposed stairway to the three upstairs suites. If you are interested, note that (1) it will cost you in excess of $100 per night depending on the room you choose, (2) you have to book well in advance, and (3) they have a web site.

The latest Mystery Car has everybody puzzled. So, let me give you a hint. It’s a foreign car that was only produced in 1970 in the United States. But it was produced for about twenty years in the country of origin as a military vehicle.