While driving the bus yesterday, I pulled over for a screaming police cruiser in Painesville. However, a man talking on his phone thought this was his opportunity to cross the intersection. So, he pulled in front of the cruiser. Not a good idea. This led to an interesting conversation with another bus driver later that day. So, when I received the following email message from Mervyn, I was very interested.

I don’t know if you’ve heard, but starting Jan 1, 2004 you will no longer be able to use a cell phone while driving unless you have a “hands free” adapter.

I went to Circuit City and they wanted $50 for a headset with a boom microphone for my cell phone. Having a friend in the cell phone business, I talked with him and was able to come up with an alternative, working through Office Depot.

These kits are compatible with any mobile phone and one size fits all. I paid $0.08 each because I bought in quantity. I’m selling them for only $1.00. I tried them out on Erickson, Motorola, and Nokia phones and they worked perfectly. 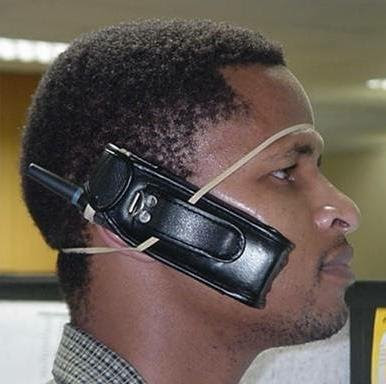