… the Buckeyes awakened me by making an incredible come back. 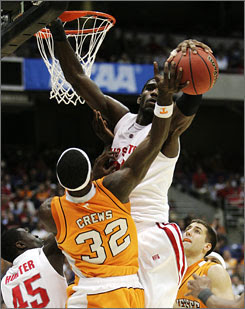 They eventually erased a twenty point defecit and traded the lead back and forth with Tennessee until the final minute.

Mike Conley made the first of two free throws with six seconds remaining to give Ohio State an 85-84 lead. But when the Indianapolis native missed the second and Ramar Smith grabbed the rebound, Tennessee had one final chance.

Smith drove the length of the court, hesitating for a split-second about 40 feet from the goal before committing to a drive, but Greg Oden rejected a potential game-winning lay-up and Ohio State escaped with their second nail-biting victory in as many tries.

Incredible! This is beginning to remind me of the 2002 championship football team. How many heart attacks can we handle? Memphis? Rematch with Florida? And I’m supposed to go to sleep now? Wow!