It seems to always happen to the Buckeyes when they were successful. Somebody would get a fat head and begin to take credit for everything that had happened. It happened to Eddie George when he played football for Ohio State. After bragging about his accomplishments, they lost the next game. Well, this time (thankfully) it was a player on the opposite team. Joey Dorsey, the center for Memphis, made some “prophetic” statements.

“I think (the pro scouts) will really be watching this game (Saturday) night because it’s two great big men going against each other,” Dorsey said. “I’m an underrated big man and he’s a lot overrated as a big man. … I think it’s going to be David vs. Goliath. I’m Goliath, he’s the little man.”

One of the reporters wisely reminded him that Goliath lost. 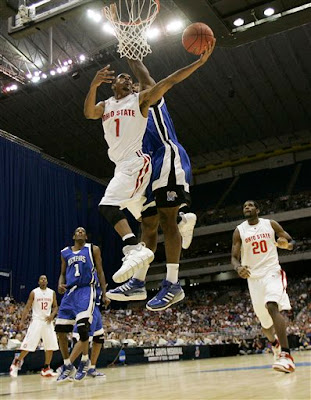