Jefferson “MacDonald” had a farm 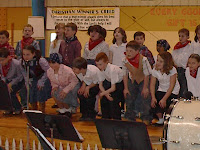 Jefferson took part in and elementary program at Mentor Christian School last Friday. In this picture, he and his classmates are singing “Old MacDonald had a Farm.” It was especially interesting to watch as the audience was ask to participate by standing and singing the animal sounds. I guess you had to be there.

The above link is an incredible explanation of the conjoined Dogaru girls who will be undergoing surgery in Cleveland. The interactive presentation explains how the children developed in their mother and then what it will take to separate them. Although I do not know the family, it would be good to pray for the upcoming surgery.

The Buckeyes make it to the NCAA basketball tournament final for the first time since 1962! But what makes it bigger is th rematch with the Florida Gators. Not only did they beat us in the football championship, but our pastor’s wife is now teaching her daycare kids the gator chop! Monday will be a big game. Win it, Buckeyes!