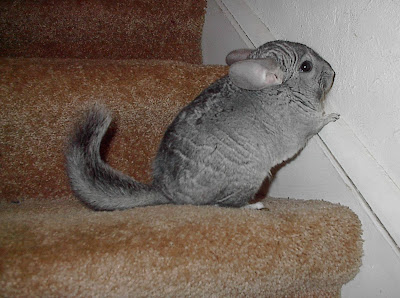 For a long time, our family has wanted a pet of some type. Nothing ever seemed to work out for some reason … until today. A co-worker mentioned last week that she wanted to get rid of a pet chinchilla. When another co-worker declined, I volunteered to at least investigate. Would it be a good fit for our family? The first step was reading about the species in our animal encyclopedia. I had no idea that there was so much history behind the animal and that it was almost hunted into extinction. Rather than tell you all I found, you may read up on the animal at Wikipedia. 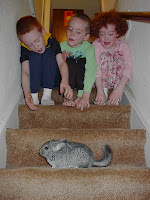 The moment of truth was this morning about 10 am. Sharon, Trenton, and I visited the family. The owners explained many interesting facts about the animal and showed us the many items that would come with it. There was a cage, extra food, wood shavings to line the cage, and lots of little extras. While you would have to pay a large amount of money for these things, they were willing to pass them along free of charge. So, after thinking things through, we decided to take the offer. Everything fit into the back of the minivan and before we knew it, we were the happy owners of our own chinchilla. 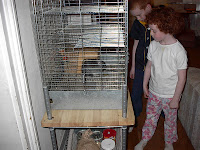 On the way home, Trent and I went through a long list of names to call her. Most were quite silly (as you can imagine) but one finally stuck. We have decided to call her Viggen (Swedish for thunder). Trenton has always liked that name since he saw his first Saab Viggen. So, there you go. We now have a Swedish-Chilean-American pet which will, no doubt, provide hours of fun for our whole family.

From all of the Ruperts, thanks alot!

2 thoughts on “Welcome to the Family!”