A boy in our youth group is a member of Mentor High’s JV football team, so I occasionally stop by to watch him practice. This afternoon, I parked by the stadium but wasn’t sure which team was his. I finally decided to walk out to the practice field where a smaller team was practicing. 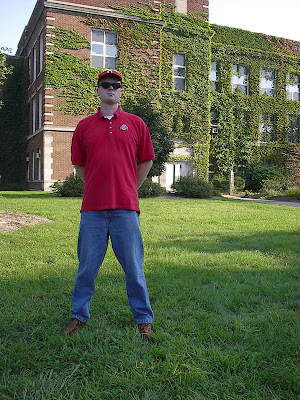 I didn’t see him but the coach looked my way and barked something at the team. After a ball boy told me it was the freshmen team practice, I walked back to the stadium to see if Greg was practicing there.

It was fairly hot so I stood in the shadows. But even there people kept looking at me. Was my shirt stained, XYZ, or what? There must have been about 100 players on the field, but one player looked like he might have been Greg. When two teens walked by, they confirmed that it was him. I waved to him but he just stared and then looked away. I wanted him to know that I was there, but didn’t want to embarass him either. So, I just kept watching and wondering.

A few minutes later, Greg walked toward me with a big smile on his face. He had finally recognized me and then the story unfolded. As you can see in the picture, I was wearing an Ohio State University polo and ball cap. After my visit to the freshmen team’s practice, three players had run to the varsity practice to tell them that (Are you ready for this?) a guy from Ohio State was checking the team out! All along they thought I was a recruiter looking for talented players to recommend to Coach Tressel!

4 thoughts on “Who was that masked man?”