A recent conversation caused me to consider once again the subject of ecclesiastical separation. The big question is whether the Bible teaches that Christian churches should separate from Christian churches, organizations, or schools that have disobeyed the clear teaching of Scripture.

Some dismiss the practice of ecclesiastical separation based on the patience of God toward apostate Israel and Jesus’ continued interaction with the temple during his earthly ministry. While these thoughts may quickly catch your attention, I think it would be good to first consider the plain teaching about separation in general. Consider the following outline I presented to my high school Bible class a year ago. 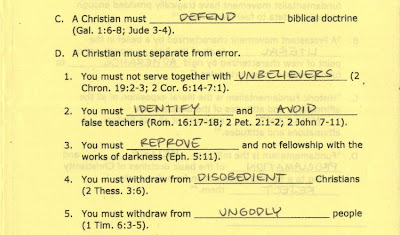 These passages teach us that separation from unbelief, disobedience, and ungodliness are necessary. How then do we explain the patience of our Lord toward sinful people?

God was patient with Israel and didn’t have certain Jews start another denomination. However, he did offer to destroy them all and start over with Moses’ descendents at one point (Ex. 32:9-10). He also killed quite a few of them on a number of occasions. His tremendous love allowed room for many to repent, but in the end does this teach us to work hand in hand with those who continue in sin? I don’t think so. Consider God’s message for godly King Jehoshaphat after he formed an alliance with wicked King Ahab.

And Jehu the son of Hanani the seer went out to meet him, and said to King Jehoshaphat, “Should you help the wicked and love those who hate the LORD? Therefore the wrath of the LORD is upon you.

That’s a pretty severe message for a king formerly noted for his godliness. When he chose not to practice separation from one of his brother Israelites, the results were distasterous. The sad thing is that his children intermarried with Ahab’s and the family ended up becoming extremely wicked. Remember Athaliah? She killed her own grandchildren to ascend the throne in place of her dead son (2 Kings 11:1). These are indeed serious consequences!

Consider also the divided kingdom. After Solomon died the kingdom was split between the north and south. What I find interesting is that during the reign of Jeroboam, some of the northern tribes left the north to join the southern kingdom because of the king’s disobedience (2 Chron. 11:14).

It would seem that separation was not only necessary back then, but was also expected by God. Yes, he was patient toward sinners (think Israel, Nebuchadnezzar, and Nineveh) but he still expected his children to separate themselves from sinful people.

Patience in a compromising church

Since separation from unbelief, false teachers, the works of darkness, disobedient Christians, and ungodly people is commanded, how will that affect my relationship with denominations, organizations, and churches which are controlled by such people? Those clear commands ought to motivate me to rebuke error and, if necessary, remove myself from the organization.

Complicity with error will take from the best of men the power to enter any successful protest against it. … Fellowship with known and vital error is participation in sin. … As soon as I saw, or thought I saw, that error had become firmly established, I did not deliberate, but quitted the body at once. Since then my counsel has been “Come out from among them.” I have felt that no protest could be equal to that of distinct separation from known evil. … That I might not stultify my testimony I have cut myself clear of those who err from the faith, and even from those who associate with them.

These are strong words from a man who had fought the good fight. Spurgeon fought against problems within the Baptist Union in the late 1800’s. In his case, he was fighting against two problems: (a) unbelief and (b) tolerant moderates who would not fight against the error. When he saw that error was deeply ingrained and that there was little chance of eradicating it, he left the group to become independent.

Stay in till you’re kicked out

In Spurgeon’s case, he stayed in until he saw there was no hope for eradicating the error. Others such as J. Gresham Machen, were forced out after putting up a valiant fight. Machen’s fight is understandable. Why should godly believers allow their church, denomination, or school to be overtaken by error? History shows how many godly men did put up a fight but were ultimately expelled. The problem was usually not the unbelievers but moderate conservatives who were unwilling to fight against error. Because of them, the problems were never eradicated. Knowing these historical accounts causes me to be skeptical about any group being “saved” once error has become firmly established.