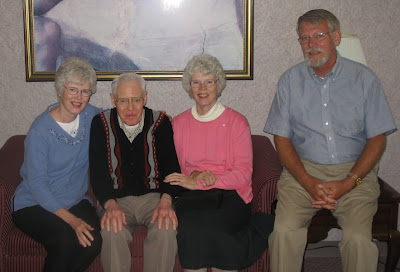 Grandpa Grimes just celebrated his 90th birthday. Unplanned sickness kept us from attending the event, but my sister Laura was there to take this picture. From left to right are Aunt Margy, grandpa, mom, and Uncle Bob. 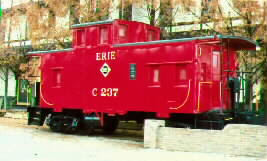 During his working years, grandpa worked for the Erie-Lackawanna railroad as a carpenter/boxcar engineer. If you’ve heard the Boxcar Bob story, you’ll quickly see where the idea for the story originated. Although we were given a Pullman blanket by grandpa after his move, things just won’t be right until we have an Erie-Lackawanna caboose in the backyard.

Grandpa grew up attending a Baptist church with his aunt in the days when that meant crossing the river in a boat or riding in a horse drawn wagon. After he married grandma, they joined the Presbyterian church in Windsor where he served as both an elder and Sunday School teacher. I’m especially thankful that when the children were in their teens, he and grandma took the family to an evangelistic campaign where my mom heard the gospel and received Christ.