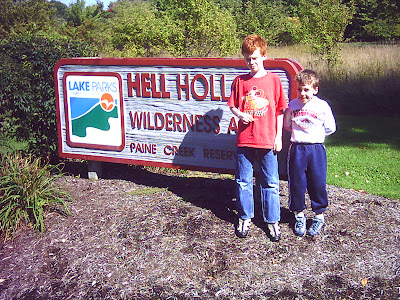 Jefferson is now a cub scout. His “initiation” was a camp out last Saturday. Trenton and I joined him for a nice day trip to a park called Hell Hollow Wilderness Area. Although we couldn’t spend the night, we set up our dome tent just for fun. During the event a number of boy scouts taught the younger boys how to tie knots, start a fire, and do basic first aid. At each station, they earned colored beads which would later be exchanged for prizes at the annual auction. 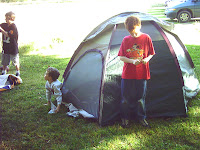 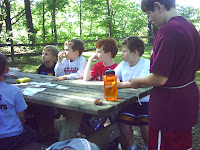 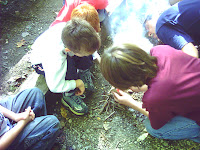 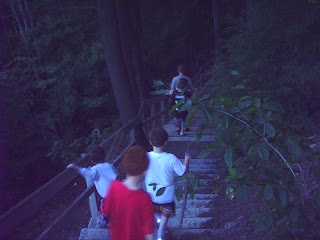 After supper one of the boy scouts (who attends Mentor Christian School) guided a group of boys and parents down into Hell Hollow. It was quite a hike down 262 steps to the bottom of the hollow. The boys got to ford a stream, climb on a fallen tree, and climb up the river bank onto some debris from a recent flood. However … when we began to return the boy scout and several boys stepped on a wasp nest in one of the fallen trees. Jefferson and Trenton both got stung, but the boys ahead of us got the worst of it, having to dive into the stream with 20-30 on their backs.

One of the highlights of the evening was revealed to me the next day. Jefferson had the opportunity to speak with a boy who was frustrated about something another boy had said. As he began telling me the story, I was about to tell him what he could have said when I thought to ask him what he had said. I’m glad I did. Jefferson told me that he first asked the boy if he was a Christian. He then went on to share a biblical truth he had recently learned in a book he is reading. That was nice to hear.

Hopefully, the Lord will give other opportunities for us to speak for him through this contact in the community.