Last school year, a co-worker offered me a Chinchilla for free. They had owned the pet for just long enough that nobody was interested any longer. We accepted the kind offer which also included the cage, stand, food, and plenty of other necessities. It was a deal we couldn’t pass up. Viggen, as we subsequently named her, had since become a member of the family. Some free pets are just too good to pass up. 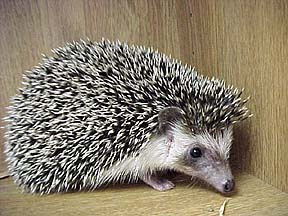 But what if a co-worker offered to give you a hedgehog? This afternoon as I was leaving the building for my final bus run, I overheard a teacher talking about a hedgehog. She later explained that a parent had donated one to a teacher last year, and now the teacher is trying to get rid of it. It sounds interesting, but after reading about the beast (wikipedia), I’m wondering if (1) they are difficult to maintain, (2) cost much to feed, and (3) are too prickly to hold. I really don’t know. Anyone have any experience with them?

UPDATE: I found another site that answered some of my questions: Hedgehog Central