There once was a little girl who had no hair. As it was now November, the top of her head began to get a bit chilly especially in the morning. So, she decided to visit the hair shop to see what could be done about things. 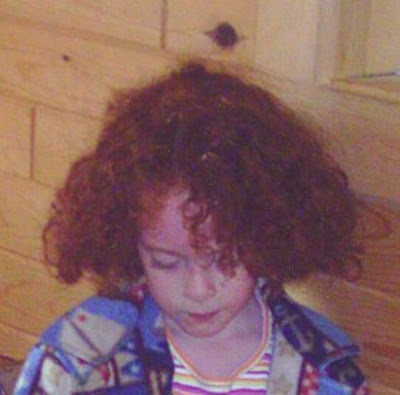 When she arrived, she walked up to the counter, and asked, “Is this the hair store?” To which the clerk replied, “No, its the pet store, can’t you tell?” After which, he laughed in a way that you often hear when obnoxious people try to make you feel uncomfortable and foolish. The little girl frowned and said, “This really is the hair store, isn’t it?” To which the obnoxious clerk replied, “Yes, it is. Now what is it that you wanted, little baldy?”

The little bald headed girl didn’t like this rude comment very much, but seeing as how her head was still a bit cold from her walk to the store, she ignored the clerk’s remark and tried a different approach. “What type of hair do you have here?” The clerk frowned and replied, “We have cat hair, dog hair, Chinchilla hair, and people hair. We have just about any type of hair you could think of.” The little girl wasn’t too keen on placing animal hair on her head, so she asked to see the store’s supply of little girl hair.

The clerk took the little bald headed girl around the store showing her the latest styles. “May I try on that one?” said the little girl. “Yes, you may,” said the clerk as he placed a dark brown afro on her little bald head. “Hmm… I’m not sure that’s my style. Let’s try a different one.” So, they walked to another section of the store. “Do you have something in long, straight hair?” The clerk took her to the front display case, where she tried on a long, blonde haired wig. “Hmm… I’m not sure that’s my style either.”

Then she saw it. In a back corner of the room, she spied a curly, red haired wig that was partially hidden from view. “What about that one?” she asked the rude hair dude. The clerk walked back to the corner and dusted off the red, curly little girl wig and noted with an air of disapproval that it was “1/2 off today and today only.” The little bald headed girl put on the curly, red haired wig. As she did this, something quite odd began to happen. The curls seemed to grow larger and larger by the second! The little girl’s hair grew up and down, right and left, and grew larger and larger until the whole room was filled!

Soon the walls of the store could not contain her curls and the whole building collapsed. But still the hair grew. It curled around the pine tree in the back yard and encircled the neighbor’s house. It grew throughout the forest and overtook large buildings downtown. Her hair continued to grow until the city, state, country, and continent were covered. Soon the oceans were dried up by her hair and the world and moon were captured in her curls. One by one the planets disappears. The sun, moon, and stars were caught up until the whole universe was completely encased in a mass of red, curly hair.

Then the little bald headed girl said, “I don’t think I want this one,” and walked out of the story.