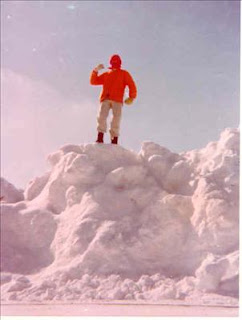 Do you remember the blizzard of ’78? I was almost eight years old when it happened, but I still think of it every winter. I also think about the water tower freezing at Northland, but that’s a different story.

Today The Columbus Dispatch posted some interesting pictures and commentary about the blizzard. They are also asking readers to post their memories and pictures. Some of them are quite interesting. Here are a few examples of what others have posted.

• I was working second shift in Marysville and when I returned to West Cols., I stopped at White Castle in a driving rainstorm. I said to myself, “I hope that this doesn’t freeze,” because there were inches of water in the streets. As soon as I got home, the temps dropped and the winds began to howl. I stayed up all night and watched the storm; it was a classic. Neighbors upstairs had their apartment windows blown out and they put a mattress against the exploded panes.

• I was 8 years old and my mom, brother, two sisters, and myself moved from our house off of Rt 62 in Johnstown to an apartment not too far from our school after my parents divorce. I remember how relieved I was that there was no school mainly because of the separation anxieties I had. We had a blast in the snow and we made tunnels and little areas in the snow.

• During the blizzard, the event that stands out the most in our memory is the tremendous frequency of lightening strikes we saw and heard all during that night. The construction of our particular unit at Little Turtle was not very good and we still joke about watching the winds outside blow our curtains on the inside. After three days inside, an heroic resident with a four wheel drive truck came by and saved the day by bringing back from the Westerville Krogers diapers and formula for our nine month old son. Will never forget the storm.

You can add your comments here.