Last weekend’s trip was meant to be a nice get-away for Sharon and me. But at the last minute, a second child got sick. So, rather than leave vomitting children with a baby sitter, I got to travel alone. Thankfully, one of our neighbors was available to drive me to the bus station in Ashtabula. (Thanks, Lance.) When we arrived at the bus stop, we were 20 minutes early. Unfortunately, the bus was 40 minutes late. So, we swapped stories for an hour.

I’ve never traveled by Greyhound before. It was (how should I say this) an interesting experience. During the first leg of the trip, a fellow in the back rapped loudly to the chagrin of all but a few giggling girls. The bus driver spoke to him from her seat. I won’t quickly forget her words: “Don’t take my kindness for weakness. I will drop you off at the next bus station if you don’t stop.” Another bus rider (who looked like a bouncer) called the boy to the front and asked him, “You have a loud mouth? I got friends that’ll lock you up!” Needless to say, the boy closed his mouth.

The trip was long and I was unable to sleep. (Perhaps it was the capuccino and Mountain Dew?) I think I nodded off for less than an hour. The bouncing bus, noisy air powered windshield wipers, combined with my nervousness about carrying Traveler’s Cheques and license plates didn’t make for a good night’s sleep. But I did get to watch a Don Juan in action. The man befriended two different women and obtained their phone numbers by smiling, tilting his head, buying drinks, and talking like a sad puppy. It was … interesting.

I eventually arrived in Jersey City and walked quickly to the commuter trains. But I had no idea what to do. After asking a security officer, I still didn’t know what to do, but finally managed to purchase a ticket. But try as I might, it wasn’t accepted by the turnstyle! A friendly lady offered her help and eventually let me use her card. I thanked her with words and meant to give her my $12 non-working card, but I couldn’t find it by the time she left the train.

I finally made it out of the train and up the stairs to open air again. And how happy I was to see the golden arches right across the street. I happily purchased a Steak, egg, and cheese bagel with extra hashbrowns and an orange juice. After paying, I promptly took my bag and left without the drink! (See what lack of sleep does to you? Just wait, it gets better.)

The car lot in which the car was parked was a few blocks away, and I was soon introducing myself to the owner of the car. He turned out to be a young lawyer who no longer needed a car due to his proximity to the commuter train. He showed me around the car noting what had been done already and what still needed to be done. When he admitted to investing over $6000 in the car, I didn’t doubt him. The trunk was full of extra parts including Boge shocks, a car cover, an extra fuel pump, and quite a few other parts.

It was soon time for the bank to be open and the deal to be sealed by cashing in my Traveler’s Cheques. But when we arrived at the local Sovereign Bank, it was closed until 10 AM! What? I had called ahead to make sure it would be open at 9 AM and that they would cash the complete amount without my having to open an account or to wait till the checks cleared. (Several other banks were demanding … err … requiring this.)

We finally found one a few blocks away but they told me without an account they would only cash $200 worth. Sleep deprivation kicked in at this point. I wasn’t very diplomatic at all. “Wait a minute! I drove all the way from Cleveland, Ohio and I’m not about to play games now. I called ahead and the manager told me that there would be no problem cashing these without an account. Don’t start playing games with me.” Two tellers were soon checking their rule books and calling other branches to see if this was okay. Eventually they graciously relented.

To make a long story shorter, I filled up the car, ate at the local White Castle fast food joint, and headed for home. (Let me just pause long enough to say that eating sixe Jalapeno cheese burgers, onion rings, and a large shake probably wasn’t the best idea I’ve ever had, but it could be chalked up to sleep deprivation again, right?)

After driving on I-80 West for a while, I stopped for gas before continuing the journey. When I got on the freeway, I thought it a bit odd to see the exit number getting larger and city names that looked more appropriate for Maryland than Pennsylvania. Wait a minute! I’m back in New Jersey! After calling my wife and parents, we determined that I had indeed been backtracking for quite a while.

When I finally arrived back in Painesville, it was almost midnight Saturday evening. The car had run better than expected averaging about 20 mpg. That’s not bad for a 26 year old V-12, eh? (As a side note, I stopped by E-check today and was a bit worried. How would the car do? I honestly shared my concerns with the Lord and was happy to find that cars 25 years old and older are exempt from emissions testing. Hurrah!) There hasn’t been a great deal of time to take pictures of the car. And it really is true that the car looks much better in person. However, I did get this picture at a gas station in Jersey City. 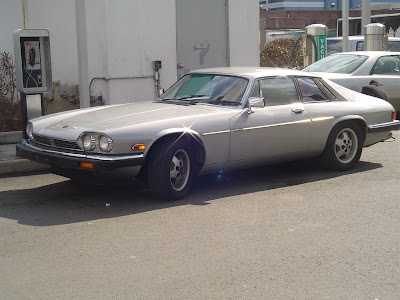 3 thoughts on “Don Juan, White Castle, and the XJ-S”