There have been a number of interesting comments made about global warming in the past decade. The most recent one has been presented in Al Gore’s film, An Inconvenient Truth. Some of my Saab friends have been arguing the case for and against Gore’s position with no clear winner. Conversations like that remind me of a funny George Bailey quotation:

To be honest, I am quite skeptical of the whole affair. For one thing, history reveals that these ideas are nothing new. “It was only 30 years ago that many of today’s global-warming alarmists were telling us that the world was in the midst of a global-cooling catastrophe.” [1] The above quotation comes from a letter written by a group of Canadian scientists who do not believe global warming to be a serious problem.

The study of global climate change is, as you have said, an “emerging science,” one that is perhaps the most complex ever tackled. It may be many years yet before we properly understand the Earth’s climate system. Nevertheless, significant advances have been made since the protocol was created, many of which are taking us away from a concern about increasing greenhouse gases. If, back in the mid-1990s, we knew what we know today about climate, Kyoto would almost certainly not exist, because we would have concluded it was not necessary.

Those scientists believe that global warming is not as big a deal as do Al Gore and many others. Why would they make such bold statements? And now that there are two opinions to consider, which opinion is right: the Canadian scientists or Al Gore? Considering the amount of divergent ideas proposed over the last century, perhaps we should all readily admit that seeing a problem and determining the cause(s) are two entirely different things.

For instance, we are told today that global warming is responsible for the decrease of tropical coral. According to some scientists, the water temperature is getting too warm for coral to survive. This may or may not be true. But as I was reading about certain sea life, I found that during the 1970’s, certain scientists had a different culprit in mind which had nothing to do with emissions. 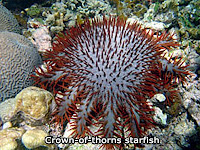 Starfishes raid oyster and mussel beds and feed on the shellfish. These raids are, however, insignificant compared with the dramatic large scale destruction of coral reefs that has recently begun … . The arch villain is the ‘crown of thorns starfish’ Acanthaster planci, so named for its covering of spines. It has sixteen arms and averages 10 in. across, although it can reach two feet. It feeds on coral polyps. It was once thought a rarity — until about 1963 when swarms were reported on the Great Barrier Reef. At the same time it was implicated in the destruction of coral in the Red Sea. Now a population explosion is taking place in many widely separated areas of the Pacific and other oceans and it is killing off coral at an alarming rate. In 2½ years it killed nine-tenths of the coral along 38 kilometers of the shoreline of Guam. [3]

The Conservation Society of Pohnpei says that this is still happening today [4]. I find this amusing. I’m not chuckling about the loss of coral but the fact that there may be multiple reasons for the decrease in its size and extent.

We are also told that temperature worldwide is increasing and will continue to do so unless stricter emission policies are mandated. Purportedly, coal fired power plants and the automobile emissions are to blame. But is this an established fact? About 34 years ago, scientists were more worried about the earth getting cooler. Let me give you another “for instance.” While reading about the stork in our animal encyclopedia, I came across the following idea.

“… [T]he white stork, like many others, is slowly declining in numbers. … The reason for the decline is not simple. For centuries storks have been regarded as symbols of fertility and of good luck, so they were deliberately encouraged to nest on houses. They are, however, shot while migrating, probably in increasing numbers and it is possible they come to grief after eating poisoned locusts. More likely reasons for the steady decline over the century are the drainage of land and the progressively wetter and cooler summers. [5]

That caught my attention. Scientists really thought the world was getting cooler and they recognized it to be a problem for certain animals. No doubt there were ideas postulated as to the reasons for this cool weather. Now almost 35 years later, scientists are noting an increase in temperature and scientists are postulating ideas again. I’m just wondering if the temperature will change in another 35 years, and we’ll all wonder why again.

[1] Rona Ambrose and Gary Lunn, “Open Kyoto to debate: Sixty scientists call on Harper to revisit the science of global warming,” an open letter to Prime Minister Stephen Harper printed in the Financial Post, as viewed at http://www.financialpost.com/story.html?id=3711460e-bd5a-475d-a6be-4db87559d605 on February 13, 2008.