Ike brought strong winds to Painesville this afternoon. As we drove to church for our evening service, my seven-year-old daughter was a bit worried about the “hurricane.” That worry intensified for her during the service as the lights flickered and we watched through the windows the trees bending in the wind. But as the guest speaker spoke from Psalm 107, it was clear to me that God was lovingly in control of the situation.

After the service, Katie was still worried about the trip home and about Sharon and Jefferson who were at home, Jeff being sick. So, before we left the windy parking lot, she prayed for God to protect us, our family, and the neighbors. I later learned that my parents had also prayed for us that day, knowing that the winds had already done a lot of damage down in Columbus. It’s a good thing to know that God’s love for his children is still readily available.

During the ride home, we listened to Handel’s Messiah and particularly enjoyed the Hallelujah Chorus as a policeman waved us past a tree on Jackson Street which had fallen across the road. As the song came to its conclusion, all three of us were singing loudly with the recording as we drove past our driveway and turned into the parking lot across the street.

It was then that I started laughing. I may be insane but it just caught me as funny that a tree had fallen in between the houses and completely enveloping the old BMW (which still won’t start). Who knows? Maybe the insurance company will pay to replace it. Now that would really be funny.

Besides the car, only a few pieces of the house were damaged. A second story gutter, the bathroom window screen, the peak of the garage roof, and the back chain link fence were each damaged. And with all that happened, nobody was hurt. God still answers prayer and I’m still smiling about it. 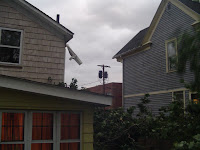 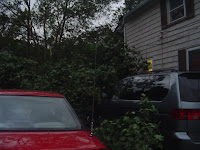 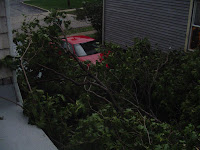 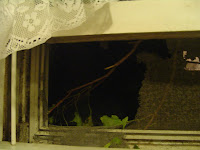 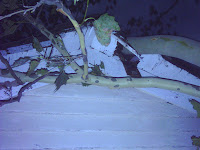 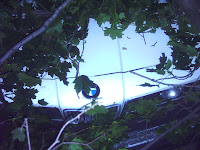