UPDATE: Ivan Maisel says get ready for the Buckeyes to repeat! Click here to read his report. 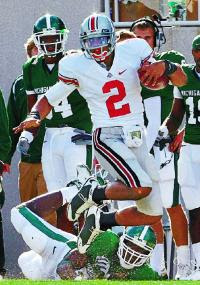 Terrelle Pryor leaped into action Saturday afternoon proving his critics wrong again. Pryor led a 45-7 win against Michigan State. He had 188 all purpose yards, two touchdowns, and no interceptions or fumbles.

The most amazing part of the article was what Pryor said to Coach Tressel before the game:

“I said, ‘Coach, if I don’t move the ball within the first quarter, sit me down,'” Pryor recalled. “‘You’d better sit me down and put Todd in, because Todd will do it.'” Tressel said in 23 years as a coach, he’s never had a player say such a thing. “I said, ‘Just relax,'” Tressel said. “‘Now, if you throw (an interception), don’t worry, you won’t have to make that request.'”