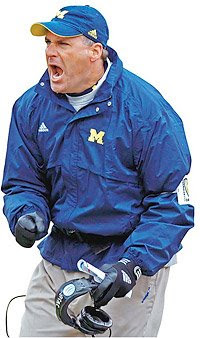 It must be difficult for the team up north to adapt to a new coach. Their 3-8 record coming into the big game is evidence of that. But a recent article in the Columbus Dispatch indicates that there are some good changes as well.

“From practices to meetings to dress codes to lifting schedules to where we eat, what we can do, where we can go, curfew — there are a lot of things that are different,” senior defensive tackle Terrance Taylor said. “You expect that, but being here, you want to hold on to something you know about.”

Michigan used to have season-long captains. This year, they were chosen on a weekly basis. Before, Michigan players didn’t have a curfew. Taylor said Sunday night’s curfew required players to be home by 10 p.m., in bed by 11. Rodriguez has banned players from using cell phones in the team’s building “because when we’re in the building he wants us talking to each other,” Taylor said.

While change would be difficult—especially for the seniors—it’s good to see a coach trying to teach character to his team. Yeah, I know. It’s Michigan but it’s still good to see.