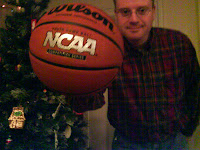 Jefferson joined the 4-6th grade basketball team this season. They practice at recess and are coached by Pastor Tim Potter from Grace Church of Mentor. When I was in high school, I played a pickup game against him, Kent Hobi (now a pastor), and Mike Goldfuss (now a missionary to Mexico) at Camp Peniel. They were very good but our high school teams were too far distant to compete. All that to say that Jefferson will have a good coach. And with the 99 cent basketball from Ollie’s in Mentor, he will have more of a head start than me at the game. I started in 7th grade.

In other basketball news, I saw a tall guy at the Beechwood Place Mall today. I was standing by Leikin Volvo’s display car when a tall, vaguely familiar guy in a gym suit walked up to the car with two other people. He looked like someone I had seen before, but I wasn’t quite sure. As I walked over to talk with them, they must have considered me a blood thirsty salesman because they moved away before I could say anything. Just then our Mercedes salesman walked over and said, “Y’know who that was? That was Sasha Pavlovic.” Cool.