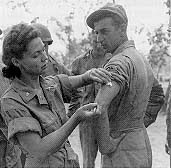 Last Sunday morning, one of our church elders asked all veterans to stand and give their name, branch, and years of service. Perhaps 15-20 people stood to speak. It was interesting to hear each one speak and to consider the wars in which he may have been involved. When the last one to speak was a tiny, white haired lady, I leaned forward in wonderment. Under what branch would she have served? After giving her name, this elderly woman stated that she had served in the Nurse Corp in the early 1940’s.

I appreciate all the people who have served in the military over the years. Without them we would have perished long ago. But when I think of military heroes, I generally think of a fighter pilot who has shot down enemy planes, the soldiers at Iwo Jima, or the soldier who single handedly knocked off a regiment of enemy soldiers. This elderly woman reminded me that there were others who were just as important. Without the nurses, support staff, chaplains, mechanics, and many others, none of the others would have made it.

For the peace and safety enjoyed now by all of us … thank you.