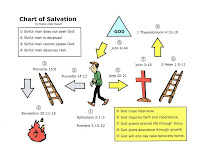 In the beginning, God created the heavens and the earth. During a period of six days, God created the world, the sun, water, land, vegetation, birds, animals, people, and many other interesting things. And everything that he made was good. His goodness to the first people was evident as he provided fruit trees for their food and daily conversations with himself. It was a perfect situation and yet something happened that changed everything.

God had given Adam and Eve everything they needed and only one stipulation. They were not to eat the fruit from the tree of the knowledge of good and evil. If they did, he promised that they would die. God’s design was to keep them from that knowledge and to give them real life. But Satan, an angel who had already rebelled against God, took the form of a snake and convinced the first people that God’s prohibition was too restrictive. Thinking they would become as wise as God, both of them chose to rebel against God’s command by eating the forbidden fruit.

The results were immediate. Their sin against God changed their minds about him and his goodness. They no longer wanted to be with him. In fact, when he came to visit them that day, they hid themselves behind some trees in the garden. Something had changed. Although, they had enjoyed his company many times before, the first sinners had died spiritually and lost the desire to seek God. The Bible tells us that this is the problem for all sinful humanity.

Each of us has inherited that same sinful nature brought about by Adam and Eve’s sin. We are spiritually dead to God with no desire to seek him. Apart from God’s influence, we are convinced that sinful pleasures are more enjoyable than a relationship with God. Sadly, each of us has chosen to believe that lie. Just like the first man and woman, we all have sinned and turned our backs on God. It’s a bad situation that can only be remedied by God himself.

Next: 2. Sinful man is deceived.