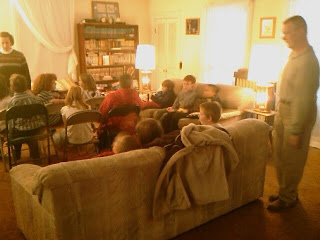 We had our first Bible Club meeting of the year on Tuesday. With 13 children, this was our biggest group yet. I was still recovering from being sick so I just taught the story while Sharon and Jim McGee handled the rest of “the show.” From what I heard the various BCC Bible Clubs had a total of almost 70 children. That’s good to know as they each get to hear from God’s Word on at least a weekly basis. We are hoping that we will have more visitors as the weeks pass by. 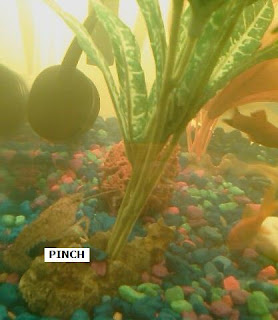 We have several new additions to the family aquarium. We started with Trenton’s 17 cent, hyper-active, shiny, Wal-Mart goldfish last year. He named it “Speedy.” But when Jefferson’s birthday present, lazy, Black Molly named “Freddy” died, we replaced it with a red, tropical, sword-tail fish which he named “Fireball.” Katie has been asking for a fish as well. So, I brought home a 17-cent crawdad named “Pinch” (for me) and two very bright, 17 cent, orange goldfish for the girls. Katie named the smaller one “Sammy” and Sharon named the bigger one, “Jilly.”