The following lesson was written for today’s Bible Club lesson:

Many years ago, Jesus healed a blind man who had been blind since birth. But the religious leaders were so against him that they couldn’t accept the fact that it had happened. They were so against Jesus that they eventually kicked the blind man out of their synagogue. It was a strange reaction to a wonderful miracle performed by the Lord Jesus until you realize who the Pharisees were.

The Pharisees were religious people who thought that obeying lots of laws would make them right with God. They taught the Jewish people that if they didn’t wash their hands before eating, they would not be right with God. Now, I understand the importance of having clean hands, but is God more concerned about clean hands or a clean heart? The rules and regulations became so important to the Pharisees that they turned away from what God really wanted and never believed in him themselves. 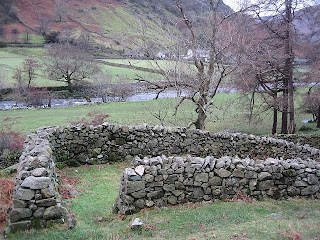 Jesus came to give believers an abundant life full of real meaning. But that life doesn’t come through keeping rules; it comes from Jesus himself. To help the people understand this, Jesus used an illustration about a shepherd (John 10:1-10). Back then, shepherds would lead their sheep to a field to eat and then take them back to a sheep fold at night. The sheep fold was a walled off section of land where the sheep could safely sleep at night. After herding the sheep inside the enclosure, the shepherd would lie across the doorway so that nobody could get in to harm the sheep without his knowing. But there was the possibility that thieves and robbers could climb over the wall and steal or kill sheep.

As the people listened, they didn’t quite understand what Jesus was saying. So, he explained that he was the Door to real life. The Pharisees were like sheep thieves because their teaching would destroy the lives of the people. Those who tried to obey all the rules of the Pharisees would never find God that way. But those who believed in Jesus would find true life God’s way. He was the Door, the only way to find God. You see, God doesn’t want us to try to be good enough for him. He knows we can never be good enough no matter how hard we try. That’s why Jesus came to earth. He lived a perfect life, taught us the truth about God, died on the cross to pay for our sins, and rose again. Because of what Jesus accomplished, we can become God’s sheep or God’s children just by turning from our own sins and believing him.

If you want to know God and be one of his children you will have to come to God through Jesus. He is the door to God’s forgiveness and to the wonderful life he intended for all “his sheep” to have. Have you entered into the new life of God through the door or are you attempting to get in some other way?