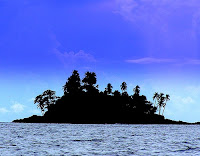 There is something about the book The Swiss Family Robinson that intrigues me. I think it’s the idea of starting over on a deserted island away from all the cares of this world. On my own island (I dreamily presume) I would have few troubles and could enjoy the rest of my life. Sure, I know nothing about farming or survival, but the dream still exists. The big idea is that problems are a result of my environment. If I could only go somewhere else all my problems would disappear, right? Unfortunately, that’s not the way things work.

Think back to the Great Flood recorded in Genesis 6-8. Noah was a righteous man who found grace in God’s eyes. He and his family were the only ones spared from the Flood. After the flood, these eight people were the only ones living on the earth. Surely, things would turn out better this time, right? Sadly, this wasn’t the case. Although he was a godly man, one of the only things recorded about Noah after the flood was not very flattering (Gen. 9:20-27). He got drunk, made a scene, and lost the respect of one of his sons. The point of the biblical account is that sin is a struggle no matter where you live. If a righteous man like Noah struggled with sin, you can count on struggling with it as well. The problem is not the environment; it’s ourselves!

For I know that nothing good dwells in me, that is, in my flesh. For I have the desire to do what is right, but not the ability to carry it out. For I do not do the good I want, but the evil I do not want is what I keep on doing. Now if I do what I do not want, it is no longer I who do it, but sin that dwells within me. So I find it to be a law that when I want to do right, evil lies close at hand. For I delight in the law of God, in my inner being, but I see in my members another law waging war against the law of my mind and making me captive to the law of sin that dwells in my members. Wretched man that I am! Who will deliver me from this body of death? Thanks be to God through Jesus Christ our Lord!

Aren’t you glad for Paul’s honesty? He had the same struggles that we do. But during those struggles, he recognized himself as the problem and the Lord Jesus as the only solution. That perspective (and not a deserted island) is what each of us needs because sin will follow us wherever we go. So, this week as you struggle with sin, recognize yourself as the problem and turn to Jesus for the help you need.