My daily reading took me to 2 Kings 7 this morning. As you know, the book continues the sad story of the rebellion of the Israel against God. However, it also tells the story of those who served the Lord during that difficult time. During Elijah’s ministry it seemed that he was all alone. But God revealed that there were 7,000 who were still serving him. One of them was Obadiah, the steward of Ahab’s house. He saved the lives of 100 of the Lord’s prophets. Elijah was definitely not alone. But he was the major prophet used by God at this time. 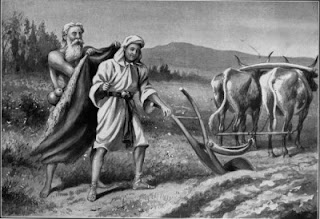 After Elijah was taken up to heaven, Elisha took over as the major prophet in Israel. In 2 Kings 7:7, he is introduced to Syria’s king as “the man of God.” That made me begin to wonder why he was called that. I think there are a couple of reasons for him being called the man of God. During his ministry, God enabled him to raise the dead, part the Jordan River, heal leprosy, make an axe head float, and many other miracles. He also was a disciple of Elijah who was greatly used by God. Imagine the stories he could tell of God’s great working through Elijah. But he also was a man known for speaking God’s message to whomever he was sent. He spoke to the kings of Israel, Judah, and Syria. He also spoke to both poor (the widow’s oil) and rich people (the Shunammite woman).

The more I think about it, the title “man of God” was an earned title. Yes, Elisha was appointed by God to succeed Elijah, but he did what a “man of God” was supposed to do. He obeyed the Lord and did what he was told to do despite the difficult times in which he lived. No doubt many of us would like to have the title “man of God.” We want to be known as God’s man. But are we willing to go through the experiences that Elisha did to earn the title?