During the last year, we have heard many stories about freedom of speech in the work place. These have come from a variety of people including NFL players and conservative Google employees. Is freedom of speech protected at work? The answer is not very clear. 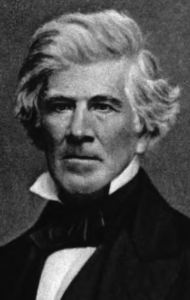 However, during the 19th century, one man faced opposition for what he wrote about politics during his own time. After publishing articles under an assumed name, the clerk of the office of the Secretary of the United States Senate was confronted by his superior for expressing his opposition to the election of Andrew Jackson (1829-37). Apparently, his pseudonym had not hidden his identity very well.

Was it inappropriate for him to express his views outside of the workplace because of his position? In other words, should government officials be quiet about their political leanings on their own time? While there may be times when one’s position should prohibit his mouth from talking too freely, this clerk was not so inclined.

“Upon entering the public office, I engaged to perform, to the best of my ability, a known and prescribed duty; to conform to the instructions of the head of the office relating to that duty; and to receive as an equivalent for the services thus rendered, not as a consideration for rights abandoned, the compensation which might be allowed by law. But I never did engage to become an automaton or machine; to look on unmoved, or without effort, when I should see the republic institution of my country in danger, or to surrender a single right of an American citizen.

In the office and during the hours devoted to its duties, I acknowledge and obey an official superior. When my official duty has closed, I stand on an equal footing with any man that breathes. In the hours of relaxation from the toil and drudgery of office, my thoughts shall wander as discursive as the air; my opinions, uncontrolled by human authority, shall be embodied in any form my judgment shall approve; … it shall be my endeavor to treasure up these precious fragments of existence, and devote them to objects which I may deem beneficial to my family or society, and pleasing to that Being who has the time of all at his command.”1

Machen wasn’t willing to give in to pressure just because someone disapproved of his opinions. He stood up for what he believed and continued speaking despite the frowns of those who were over him. While opinions may need to be held back at work, there is no law in the United States holding back the free expression of ideas at other times, nor should there be.

1As quoted in J. Gresham Machen: A Biographical Memoir by Ned B. Stonehouse.